Broadband (Buffering….Buffering….moans of frustration!) CCDC had been working with Ullapool Community Trust to lobby for better broadband but we were delighted, after loads of effort was going in and nothing moving on, when an expert team called Highland Community Broadband (a subsidiary of Ullapool Community Trust) formed to finally provide super-fast broadband to Ullapool and surrounding area. Using a series of receivers and transmitters, we expect that the whole of Coigach will have coverage – receiving speeds of up to 50mbps. As anyone knows with busily gaming youngsters in the house or a business to run, this will be a massive improvement on the patchy and often rubbish service we get at the moment. The target fund to do it (£75,000) has been well surpassed through the subscriptions of bandwidth-hungry locals! Work will begin in Ullapool shortly and Coigach in April. It is not too late to sign up! Further info at http://www.hcbroadband.co.uk 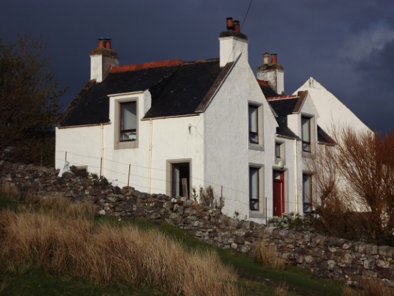 CCDC’s very first housing project sees new tenants moving in any day! The level of applications was such that it was proof, if proof were needed, that Coigach needs more affordable housing! Anticipating that Highland Council might simply sell it off to the highest bidder, as it has done to schoolhouses elsewhere, CCDC had successfully bought the old and empty building for the community. Highland Small Communities Housing Trust (HSCHT) took on the project with CCDC and with funding from the Scottish Government’s Rural Housing Fund, the Nationwide Foundation and Highland Council they turned the much-loved but unfit old house into two well-insulated, comfortable flats. HSCHT have taken on the job of tenant selection and managing the leases. A wee open day is planned to let the community have a peek before the happy new tenants move in…. there may well be cake. 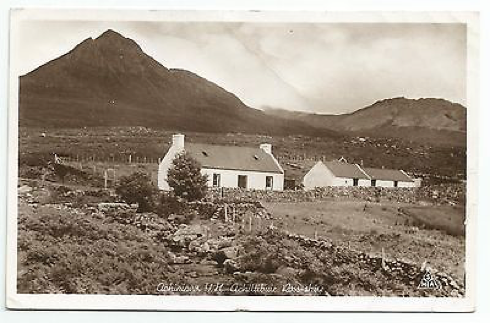 The All-New-but-still-the-same, characterful Acheninver Hostel!CCDC advised and closely assisted Scottish Wildlife Trust (the owners) in their search to secure energetic new tenants. Under the enthusiastic new management of recent-ish locals Ruth Bradley and Iain Simpson (Iain has strong family ties with Coigach) the hostel has had a facelift and been open for business and welcoming guests since early July.  Iain and Ruth had a very busy summer and have extended the season by staying open all year! Big plus all round for all Coigach’s businesses and for visitors desperately seeking overnight or short-stay accommodation. http://www.Achininverhostel.com                                                Look out for great courses being held there too! 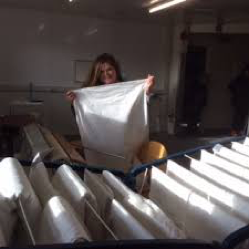 Our Community-owned (ex) Smokehouse: CCDC has a policy of allowing new business to jump start with a very low rental here … and so was born Summer Isles Steamie (Rachel Macleod’s laundry business) which opened in February 2016, providing a much welcome service to self-catering and accommodation businesses as well as busy households. Rachel can be reached on 01854622744 or on her Facebook page “Summer Isles Steamie”. Another local new business plans to use part of the building for the summer, so watch this space.  CCDC is still exploring options for the building’s long term future and as a community asset and how it can benefit the whole of the community best.

Now’s the time to bring your business idea to fruition! See Julia or Anne any Wednesday morning at the Hall or give them a bell… always happy to help!

CCDC is a partner in the CALL Partnership Scheme: In July last year, Coigach and Assynt Living Landscape Partnership Scheme heard they’d been successful in the 2nd phase of their bid to the Heritage Lottery Fund. Yipee-i-ay, pardners!! This important five-year scheme boasts 28 great projects in total – with the potential for more. Some are already off the blocks and the selection process for small grants for more projects is in train as we write. We are up 5 new jobs! Scheme and Assistant Scheme Manager, Education Manager, Woodland Manager …and there’s potential for more. Full scoop at coigach-assynt.org. As partners we’re involved in creating footpaths and taking forward a musical heritage project, all for Coigach. 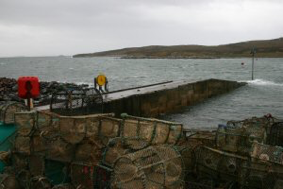 Old Dornie Harbour improvements: Bye (Brexit) bye to European funding soon and no confidence about what might replace it, so ambitious plans to improve facilities at Old Dornie have had to be scaled back.  However, CCDC has secured funding from HIE to help kick-start the project, which is being taken forward by the Pier Users Group under the chairmanship of Richard Williams.

Ben More Hydro: It’s up and running close to the Achavraie burn and making loads of lovely clean electricity already having been officially commissioned on the 19th December last year. It looked at one point in mid-2016 that it was all water under the bridge and the end of the road for BMH, but by transferring the project to energy company Locogen who agreed to take on the project – and all the risk and cost- it has been able to continue successfully after all, in no small part due to huge efforts by our volunteer directors.   The turbine has already achieved its full output of 500kW on several occasions.  The community will benefit, although it doesn’t own the project, by receiving a stonking 12.5% of BMH’s profits via CCDC, and another 12.5% which will be invested into local Coigach Assynt Living Landscape projects. Win, win, we would say! 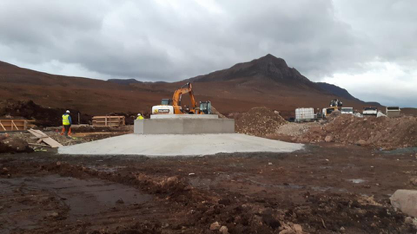 Coigach Wind Power: The wind it doth blow, and we shall have….a revenue stream for community benefit for many, many years to come! Our single community wind turbine will be kissing the wind very soon: the track to the site is complete (for use by walkers, crofters, anyone after the turbine is up) the crane pad is finished and the underground cable is buried ready for plugging in. The foundations and base build are well underway in readiness for the turbine crossing the briny from Denmark (where it was built) to its new home in Achavraie. Prize for the best name suggested but NOT Windy MacWindface, please! We look forward to selling Coigach-generated wind power by late March: good for our community, good for the planet!

CCDC is converting to a Charity: As noted above the revenue from our renewable projects is moving ever closer.  As a result, we have undertaken a review of our structure to ensure that every penny earned by the projects finds its way back into the community.  The review showed that converting CCDC to a charity was the most efficient way to deliver that objective, and so we recently submitted an application to OSCR (Office of the Scottish Charity Regulator) to convert to a Charity. In the proposed Articles, we have clarified that when we are able to give grants, that decision making will be made by a group separate from the Directors of the company, thus ensuring that the giving of grants is separated from the running of the company.

One thought on “February News”

Go to article reffering to: